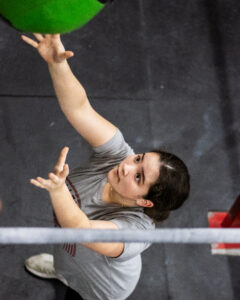 My name is Jaya Kinley, I’m 16 years old, and I’m a junior at Hereford High School! I’ve always been fascinated with space, environmental science, and math, so I definitely want to be a STEM major when the time comes. I’m also obsessed with lifting, I’m obsessed with Nicole Flater, and I guess I’m also obsessed with reading (when I have the time because junior year is a lot), playing piano, and The Office (because who isn’t).

What led you to try CrossFit?

During COVID, I wanted to find a way to stay active. I was missing sports and, at first, planned to use my training as a way to get fit enough to try out for the high school soccer team, but after a little while, I found that my passion actually just lied in the workouts I was doing at Titan with my friends.

Why did you continue to CrossFit?

I continued to do CrossFit because it made me feel amazing! The community at Titan is unlike that of any other place I’ve been. Everyone is so incredibly uplifting and supportive, and I loved the feeling of working out with my friends. And then, when Coach Colette approached me to see if I was interested in the Olympic lifts, I delved into a whole new side of fitness that has become one of the biggest and most important parts of my life, and that I continue to work on with Coach Nicole.

I used to be insanely uncomfortable in my own skin. I had a bunch of self-esteem issues, and I never really felt like I would fit in anywhere in the fitness world. But then when I started lifting, I felt so strong and capable that my entire perspective on all of my insecurities changed. My goals evolved from wanting to look a certain way to wanting to get stronger and lift heavier weights. I became so much more appreciative of all of the things that my body allowed me to do. I may not have had the “perfect body” that I had always wanted (and still do from time to time), but I was able to execute heavy lifts and meet milestones that I was proud of.

Coach Nicole never fails to put a smile on my face. Every practice, she pushes me to challenge the limits that I’ve set for myself in my head and makes me laugh and smile while doing it. She is always the brightest presence in the gym, and she makes what feels like the most terrible day in the world that much better by just being there and breaking out in song while I’m wheezing from pause back squats.

I think one of my favorite memories is when I hit my back squat PR. I was in the back, and I was nervous as heck because I’m always terrified of failing. But on my last lift, a bunch of my friends came back to watch me, telling me to keep driving as I fought to stand it up. And when I completed the lift, I don’t think I’ve ever experienced a better combination of emotions. I felt strong, I felt accomplished, and I felt so insanely loved with everyone there to give me a high-five after they had just cheered me through the whole thing.

What are you proud of and why?

I’m proud of competing in the Baltimore Open. That was a giant step outside of my comfort zone. I, of course, was filled with anxiety the day before, but when I showed up, trusted that my body and mind knew what they were doing after hundreds upon hundreds of repetitions, and let the adrenaline take over, I actually completed five successful lifts in front of a bunch of people. After that competition, I felt on top of the world because I had just accomplished something that terrified me, I had PR’d, and I had also just met Kate Vibert, who is one of the coolest humans on the planet (besides Coach Nicole of course). I’m competing again this year—along with a bunch of other Titans (woohoo!)—and I’m super excited to give it another go.

What’s your advice for other CrossFitters or people looking to start?

My advice for other CrossFitters is to get out of your own head. I have always been absolutely terrified of failing lifts, and so the biggest obstacle that I’ve encountered in my lifting journey is mental blocks. Countless times, I’ve gone into lifts convinced that it was too heavy for me to get overhead. And, of course, as soon as I lift it up and try to snatch it overhead, I end up bailing because I didn’t approach it with the same decisiveness and confidence that I should have. And then because I failed one lift, I end up failing lifts in the rest of my sets because the fear sets in and the insecurities tell me that it’s absolutely impossible to lift the bar after I just completed a whole bunch of reps at a weight that was only five pounds lighter.

After a particularly bad snatch day, I received some advice from a friend that compared lifting to walking. When you’re walking and you slip down the stairs, your ego is hurt, sure, because you just freaking fell down a flight of stairs. But then you get up and keep walking, because even though you slipped, your body doesn’t forget how to walk. It’s muscle memory. And the same goes for lifting. When you fail a lift, when you catch it weird and have to bail or you scare yourself into a mental block and can’t get it overhead, sure, it hurts your ego, but your body knows what it’s doing from hundreds and hundreds of previous repetitions during practice and during CrossFit classes. Basically, this is a roundabout way of saying to trust your own strength and that muscle memory that you’ve built before you convince yourself that you can’t do something. I’m still definitely learning this today, but I think I’ve come a long way since when I first started lifting. I’m still kind of scared of failing lifts because it makes me feel crappy, but the difference is that now, I’m able to tell myself that all of those insecurities that I’m feeling aren’t logical, and I can complete this lift just as well as the ten others that came before it. Anyways, thank you for reading my TED Talk manuscript, and I hope I’ve been somewhat helpful if anyone’s struggling from similar confidence issues.

Why the coaches chose Jaya as Titan of the month

Jaya is our youngest titan yet. At 16 she has demonstrated ambition, perseverance and consistency that people significantly older than her struggle with.

“She is a 16 year old youth lifter and CrossFitter. She never wants to miss a session and gives me all heart and soul every time she lifts. She is knocking on the door of a 300 pound back squat in just about a year of work and is the most humble young lady ever. She is always happy to be at Titan. She loves CrossFit and speaks highly of every coach she has had in the teens class. She is passionate about everything weightlifting, but also gives everything when it comes to sled pushes and sandbag carries. Jaya has pushed me as a coach and really made me step up my game to keep an athlete interested, focused, and continuing to make gains. I can say a million things about why I love her so much.”